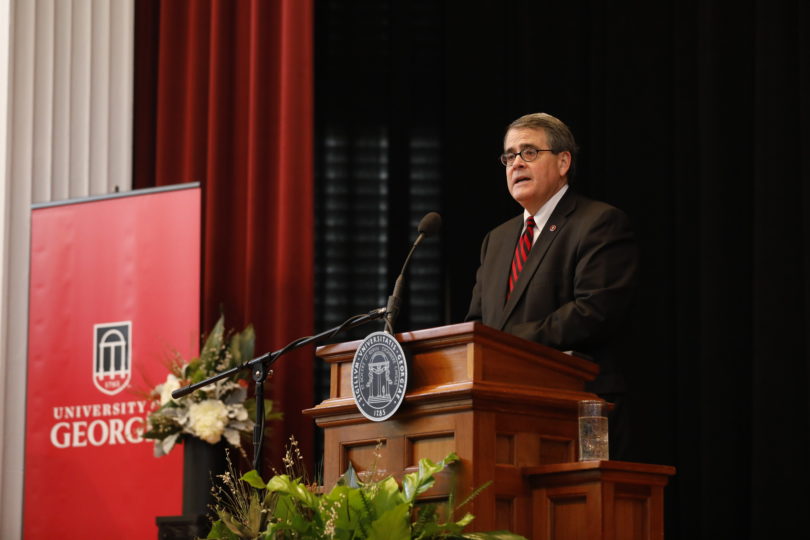 The university will allocate $300,000 in private funds over the next five years to launch the program, which will combine financial and academic resources with mentorship and leadership opportunities to support this population of students.

“You might not realize that many of our in-state students are from rural Georgia,” Morehead said.  “Some of them come from low-income backgrounds and are the first in their families to attend college. They face unique challenges on campus, and they can benefit from targeted support.”

The idea came from the President’s Task Force on Student Learning and Success. The task force—initiated by Morehead last February—spent most of last year developing ideas to strengthen the educational experiences of UGA students both inside and outside the classroom.

The task force recommended steps to increase active learning in UGA classrooms, citing a growing body of research on the effectiveness of teaching methods that emphasize collaborative, group-based learning.

Morehead said he will allocate $250,000 for a summer institute that will help faculty incorporate active learning strategies into their undergraduate courses, and he is designating $1 million to transform a number of traditional classrooms at UGA into active learning spaces.

“Many traditional classrooms on campus—especially those with fixed chairs and tables—are not equipped to facilitate interaction and teamwork, hallmarks of active learning pedagogy,” Morehead said. “This initiative will help ensure that more of our faculty have access to instructional space tailored to this teaching method.”

Morehead also announced a pilot program to support seniors nearing graduation who struggle to stay in school because of financial hardship. The program, supported by $250,000 in private funds, will award up to $2,000 in completion grants to help keep these students on the path to graduation.

“Low-income students who withdraw in these circumstances are at a high risk of never returning to graduate, of never realizing the full promise of higher education,” Morehead said. “Unfortunately, this is a national problem, but at the University of Georgia, we intend to do something about it.”

The university also will take steps to evolve its undergraduate curriculum by strengthening its writing requirement and making data literacy a cornerstone of undergraduate education. Academic leaders and faculty committees will begin work immediately to develop proposals for these key developments that can be approved through the University Council and implemented no later than fall 2019.

Morehead also declared in his address that UGA is “bound by its history, by its mission, and—yes—by its greatness to be a leader on the world stage,” citing the institution’s many outreach initiatives and a recent report that estimates the institution’s annual economic impact on Georgia at $5.7 billion.

“As a UGA Foundation trustee, I see firsthand the incredible success taking place at the University of Georgia,” said Neal J. Quirk, UGA Foundation trustee and partner at Quirk & Quirk LLC.  “Under President Morehead’s strong leadership, UGA is thriving in all areas of its mission and elevating its position among the very best public research institutions in the nation.  I am proud to see my alma mater changing lives every day.”

To expand UGA’s role in economic development and increase its capacity to solve grand challenges, Morehead announced a presidential task force to develop plans for a new innovation district on campus.

“In order to overcome the range of challenges facing our society,” Morehead said, “the American public research university must evolve its innovation ecosystem to find solutions; to develop new products and ways of doing; and to create the jobs, companies, and industries of the future.”

The University of Georgia is perfectly positioned to accept this responsibility, he said.

In closing, Morehead thanked members of the UGA community for their many contributions to the institution and encouraged them to avoid resting on the accomplishments of the past year.

“If we resolve never to let up, to continue charging forward at this thrilling pace, I am convinced that when the history books are written 100 years from now, the University of Georgia will be held up as a model for how the American land-grant university transformed in the 21st century to expand its impact on its home state, on the nation, and on the world,” he said.

To find out more about his address and initiatives, go to president.uga.edu/progress.

Office of the President